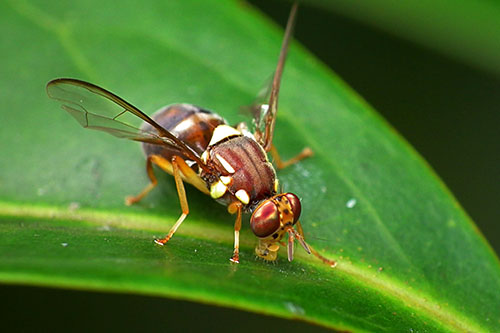 The Department of Primary Industries and Regional Development (DPIRD) is responding to the detection of an adult female Queensland fruit fly (Qfly) in a department surveillance trap.

Qfly is a destructive fruit pest which attacks a wide range of fruits and some fruiting vegetables.

The department has responded quickly with an eradication program to prevent any potential spread of the pest. This includes fruit and vegetable movement restrictions for Fremantle, and parts of East Fremantle, North Fremantle and White Gum Valley, and surveillance and baiting operations close to the detection point.

An adult female Queensland fruit fly (Qfly) was found on 24 January 2018 in a Department of Primary Industries and Regional Development (DPIRD) surveillance trap, in a residential area just east of the Fremantle CBD.

As of 23 February 2018 no further Qfly have been detected.

The detection was made in a surveillance trap that forms part of DPIRD’s early warning fruit fly trapping system. Over 1900 traps across the Perth metropolitan area are regularly monitored, to assist in proving WA’s Area Freedom from Qfly and to provide an early warning against the pest.

The Department has officially informed other jurisdictions and the Commonwealth of the detection and that DPIRD is implementing a response in accordance with Australia’s Fruit Fly Code of Practice.

It is important to note there have been no recent Qfly detections in any commercial fruit or vegetable production areas.

Western Australia’s Area Freedom from Qfly, which underpins market access for a range of produce, remains in place.

As part of the eradication program, DPIRD has established three zones (see map):

Different restrictions apply to each area. Support and participation from residents and businesses in these areas is vital to successful eradication.

Within the Outbreak Zone, additional traps have been deployed and are being checked regularly. DPIRD has been making contact with owners/occupiers to get access to private properties with host trees, to inspect fruit and carry out baiting. Host street trees are also being baited. Trees are being baited with organic insecticide Naturalure™.

Where owners/occupiers are not home, a contact card is being left, with details on how to make an appointment with DPIRD officers to return and carry out baiting.

DPIRD officers will be clearly identifiable by uniform and will carry photo identification. Support staff will also carry photo ID.

Within this zone additional surveillance traps have been installed, that are being checked regularly.