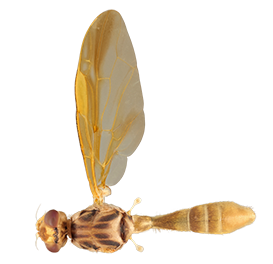 The papaya fruit fly, Anastrepha curvicauda (syn. Toxotrypana curvicauda*), is a very distinctive species commonly mistaken as a wasp due to its morphology and behaviour. Overall colouration is yellow and black, with females possessing a very long and slender abdomen and a curved ovipositor that is longer than the body. Male flies are similar in appearance to females, but less markedly banded and lacking an ovipositor. Overall body length ranges from 8.5 – 12.5 mm; ovipositor length from 9 – 14 mm.

*The fruit fly genus Toxotrypana has been synonymised with Anastrepha

Although originally considered to be monophagous, infesting only wild and cultivated papaya, this species has also been reported on mango and milkweed in Florida, and other plant species in Mexico.

The papaya fruit fly is distributed throughout the Caribbean, particularly in Puerto Rico, the Dominican Republic, Trinidad, Cuba and the Bahamas.

In North America, the fly is restricted to peninsular Florida, southern Texas and Mexico. 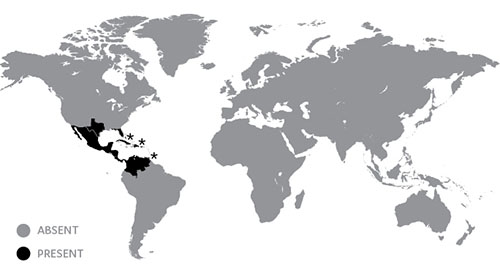 Anastrepha curvicauda may initially be confused with other members of genus Anastrepha; online keys are available.

All members of this genus are exotic to Australia, however, and are readily distinguished from other fruit fly genera (e.g. Bactrocera, Zeugodacus, Dacus).