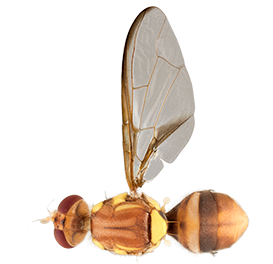 BOLD reference data available, but cannot be distinguished from B. neohumeralis or B. tryoni.

Vspl: Does not cut

This species cannot be distinguished from B. neohumeralis or B. tryoni.

Cameron et al. 2010 found that there is no genetic evidence supporting the separation of B. aquilonis and B. tryoni as distinct species. 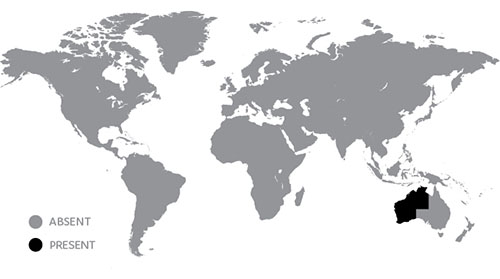 In the Northern Territory this species dramatically increased its host range during 1985. Since B. aquilonis and B. tryoni will produce viable offspring when crossed in the laboratory (Drew and Lambert 1986), hybridisation with B. tryoni was strongly suspected and might explain this increase (Smith and Chin 1987; Smith et al. 1988). By 1997, most but not all commercial production areas and larger towns supported populations of this fly (i.e. the suspected hybrid), which attacks a wide range of cultivated hosts. Therefore, many of the Northern Territory host records for B. aquilonis since March 1985 are attributed to the suspected hybrid B. aquilonis x B. tryoni and are recorded under B. tryoni and not under B. aquilonis in the above table (Hancock et al. 2000).

Bactrocera aquilonis and B. tryoni are very similar in general body and wing colour patterns. Bactrocera aquilonis differs in being an overall paler colour with the scutum pale red-brown and the abdominal terga generally fulvous without distinct fuscous markings. However, these differences are not easily observed. Also these species can be separated on the differences on the ovipositors: apex of aculeus rounded and spicules with 7-10 uniform dentations in B. tryoni compared with the more pointed aculeus and uneven dentations in B. aquilonis (Drew 1989).

A recent molecular genetic study of north-western Australian fruit fly populations (Cameron et al. 2010) concluded that there is no genetic evidence supporting B. aquilonis as a distinct species from B. tryoni. They conclude that the recent increase in host range of fruit flies in north-western Australia is due to local populations of B. tryoni (= B. aquilonis) utilising additional food resources from increased agricultural production in this region.

Currently, B. aquilonis is regarded as belonging to the B. tryoni species complex which includes B. tryoni, B. neohumeralis and B. melas. It is most similar to B. tryoni, and is difficult to distinguish from paler B. tryoni forms. Further research on the taxonomy of this group is currently being undertaken.