In Australia, there are no species of Ceratitis that look similar to C. capitata. Consequently, the following characters can be used to distinguish C. capitata from all other species of Tephritidae occurring in Australia.  These features include;

These characters also distinguish C. capitata from all other species in the genus wherever they may occur worldwide. Several species of the subgenus Ceratitis closely resemble C. capitata in the thoracic pattern, the apical expansion of cell cup, the presence of dark markings in the basal half of the wing, and in having the anterior orbital bristle of the male modified in some way. In C. capitata, it is black and resembles a diamond apically rather than some other shape (Foote, Blanc and Norrbom 1993).

BsrI: Does not cut

HhaI: Does not cut

DdeI and RsaI are fully diagnostic for C. capitata, although most of the others provide additional diagnostic value.

Ceratitis capitata is a highly polyphagous species and its pattern of host relationships from region to region appears to relate largely to what fruits are available (CABI 2007). It has been recorded on hosts from a wide range of families. These include:

For a full list of recorded hosts see CABI 2007.

The past and present distribution of Ceratitis capitata in Australia has been reviewed (Dominiak and Daniels 2012).

Ceratitis capitata was introduced into Western Australia in 1898 and NSW, Victoria and Queensland around the same time. It was last recorded in the eastern states around the mid 1900s. It’s elimination may have been due to competition with Bactrocera tryoni combined with controls applied in affected orchards (Permkam and Hancock 1994).

Now only found in Western Australia, it has not been detected in any eastern state since the 1950s. 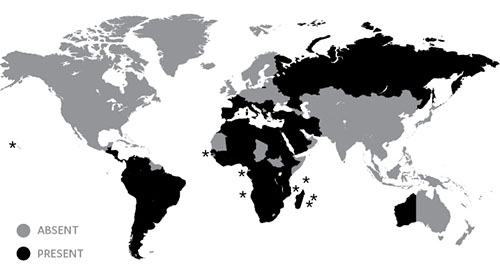 The males of Ceratitis capitata are easily separated from all other members of the family by the black pointed expansion at the apex of the anterior pair of orbital setae. The females can be separated from most other species by the characteristic yellow wing pattern and the apical half of the scutellum being entirely black (White and Elson-Harris 1992).

Trimedlure/capilure and terpinyl acetate. Also attracted to EGO lure which appears to be more powerful than trimedlure