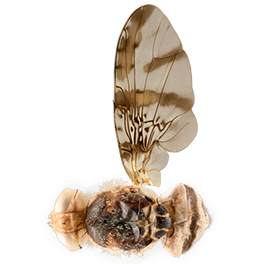 This is a recently described species closely allied to Ceratitis rosa. The description of this taxon is provided below.

Unknown. Females cannot be differentiated currently and, therefore, no female specimens are included in the type series. The description of the female of C. rosa as given in De Meyer and Freidberg 2006 applies to C. quilicii sp. nov. as well.

Due to the recent distinction of C. quilicii as a separate species from C. rosa, these distributions may require further resolution as more knowledge is gained of each species’ true geographic range. Similar to C. rosa. The males can be distinguished by minor differences of the mid-tibia, with C. rosa having a broader mid-tibia with black coloration reaching the ventral and dorsal margins of the tibia throughout, while C. quilicii has a more slender tibia, gradually tapering towards the base, and with the black coloration not reaching the ventral and dorsal margins throughout the full length.

Capilure. Also attracted to EGO lure which appears to be more powerful than trimedlure