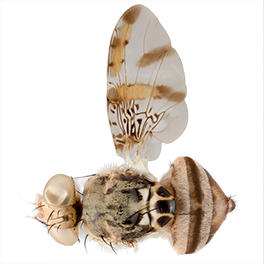 Head: Anterior pair of orbital setae not modified in any way.

Thorax: Scutellum marked black and yellow, with yellow lines or areas meeting margin, such that each apical scutellar seta is based in or adjacent to a yellow stripe; male mid-femora without stout ventral setae; mid-tibiae with rows of stout setae along the distal half of both the anterior and posterior edges giving a feathered appearance.

The males of most species of subgenus Pterandrus have rows of stout setae on both the anterior and posterior edges of each mid-tibia, giving a feathered appearance.

Ceratitis rosa can be separated from most other members of this subgenus by having this feathering confined to the distal half of the tibia and by lacking stout setae on the underside of the mid-femur. The males also lack the spatulate head appendages of subgenus Ceratitis.

Unfortunately, there is no simple method of recognizing females, except that Pterandrus species tend to have brown wing bands and a generally brown body colour, which contrasts with the yellow markings of C. capitata.

BOLD reference data available, but not well resolved amongst a number of other species in BOLD.

BsrI: Does not cut

HhaI: Does not cut

Fully diagnostic restriction enzymes are DdeI, HinfI, RsaI, Sau3A, SspI and all other enzymes have some restriction value.

Ceratitis rosa has been recorded on hosts from a wide range of families. These include:

For a full list of recorded hosts see CABI 2007.

Due to the recent distinction of C. quilicii as a separate species from C. rosa, these distributions may require further resolution as more knowledge is gained of each species’ true geographic range. 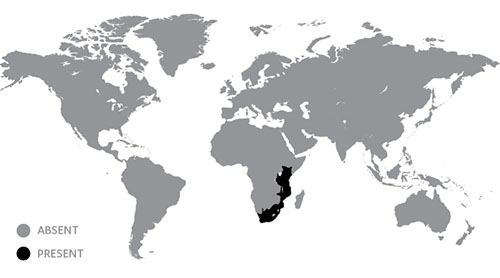 This fruit fly closely resembles the Mediterranean fruit fly in appearance. It averages slightly larger and has characteristic picture wings and dark black spots on the thorax. The arista of the antenna is plumose, while that of the C. capitata bears only short pubescence. The front of the male lacks the pair of conspicuous spatulate setae which is found on the male C. capitata. The mesothoracic tibiae of the males are clothed with dorsal and ventral brushes of elongated bluish-black scales, lacking in the C. capitata. The ovipositor sheath of the female is shorter than the width at its base. Length of the fly 4 to 5 mm (UF and FDACS 2009).

Ceratitis rosa also closely resembles C. quilicii, a recently described species. The males can be distinguished by minor differences of the mid-tibia, with C. rosa having a broader mid-tibia with black coloration reaching the ventral and dorsal margins of the tibia throughout, while C. quilicii has a more slender tibia, gradually tapering towards the base, and with the black coloration not reaching the ventral and dorsal margins throughout the full length.

Trimedlure and terpinyl acetate. Also attracted to EGO lure which appears to be more powerful than trimedlure