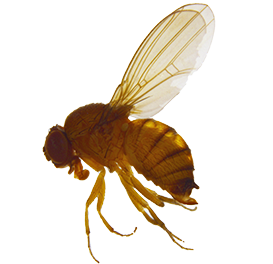 A factsheet and draft diagnostic identification protocol have been produced for Australia (Blacket et al. 2015 b).

Sophophora species are characterised by relatively narrow cheeks and possession (in most species) on the abdominal tergites of dark posterior bands that are not interrupted in the mid-line (Bock 1980).

SWD has a uniform apricot coloured thorax that is free of stripes, spots or patterns, with unbroken dorsal bands on its abdomen (Blacket et al. 2015 b).
Male SWD have a single apical wing spot and a single row of apical dark combs running across (rather than parallel with) each of the basal two tarsal segments.

Female SWD possess an ovipositor that is strongly sclerotized with robust teeth (typically with 30-36 teeth, Seljak 2013), very strongly developed along the lower half towards the ovipositor tip with a saw-like lower edge, the ovipositor is 6-7 times longer than the diameter of the spermatheca (only 2-3 times longer in most other Drosophila species) (Hauser 2011).

Not available/included in this edition.

Spotted Wing Drosophila (SWD), is one of the few species of Drosophilidae known to be a pest of healthy, unripe fruit (Walsh et al. 2011, Atallah et al. 2014), Drosophila generally prefer to breed in fruit that is already decaying and fermenting.

SWD has recently and rapidly spread from eastern Asia to many other regions of the world (Walsh et al. 2011), including parts of North America, Europe and South America.

SWD is currently unknown from Australia. 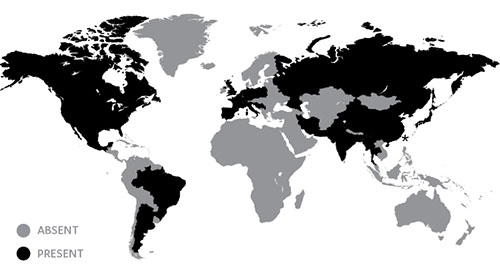 SWD belong to the Sophophora subgenus of Drosophila, a group that contains a large number of species (>300 worldwide), including the common cosmopolitan D. melanogaster and D. simulans. There are twenty species currently known from Australia (Atlas of Living Australia).

Male D. melanogaster and D. simulans are superficially similar to SWD in usually possessing dark tipped abdomens, but they differ in the morphology of the combs on their basal tarsal segments and in having non-spotted wings (Blacket et al. 2015 b).

Female D. immigrans are superficially similar in the morphology of the ovipositor, however the relative size of the ovipositor compared with the spermatheca differs substantially between these two species, and in SWD the ovipositor is strongly sclerotized with robust teeth very strongly developed along the lower half towards the ovipositor tip (Hauser 2011).

Adults are known to be attracted to traps baited with a combination of wine, vinegar and soap (Landolt et al. 2012)