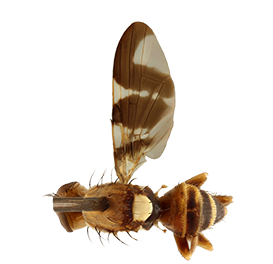 The four transverse wing bands are present and connected. The thorax of R. completa is orange/pale brown and the abdomen is partly dark brown. The scutellum is concolorous yellow (Foote et al. 1993).

BOLD reference data available, but not well resolved amongst a number of other species in BOLD.

Southern and Central USA including northern Mexico; adventive in Western USA since the 1920s. Also established in Southern Europe since the early 1990s (CABI 2007). It is widely distributed over Central and Western mainland USA (pers. comm. Drew 2010), but this species is absent from several states; the map as presented does not represent true geographic distributions within the USA. 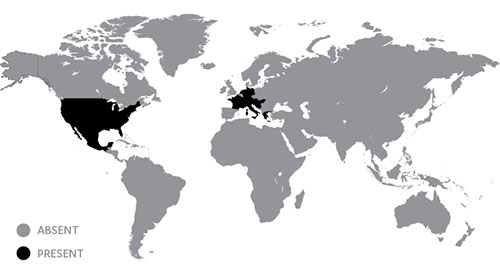 Rhagoletis completa is an unusual economic tephritid species in that it is a major pest of walnuts, in contrast to the soft fleshy fruit hosts of other fruit fly species. It is best diagnosed by the distinctive wing colour patterns and a red-brown thorax. Rhagoletis completa is similar to R. berberis; however, the thorax and abdomen of R. completa are golden yellow (completely black in R. berbeis) and the scutellum is concolorous yellow (black with a distinct yellow spot in R. berberis). This species may also be confused with R. suavis.