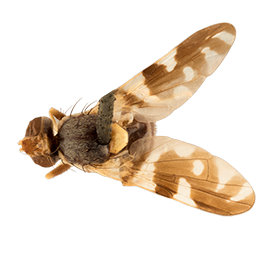 Thorax and abdomen predominantly black; abdomen with no transverse pale stripes, scutellum pale except for small dark lateral spots, wing with posterior and anterior apical cross-bands, distal and preapical cross-bands broadly joined. In wing pattern alone, R. fausta is unique among North American Rhagoletis in combining a very broad connection between the discal and subapical bands in cell dm with the presence of both an anterior and posterior apical band.

Rhagoletis fausta has been recorded on hosts from the Rosaceae family, primarily from Prunus species (for a full list of recorded hosts see CABI 2007).

Widespread occurrence in western and eastern North America (United States and Canada) (CABI 2007). Distribution in the USA is widespread, however this species is absent from several states; the map as presented does not represent true geographic distributions within the USA and Canada. 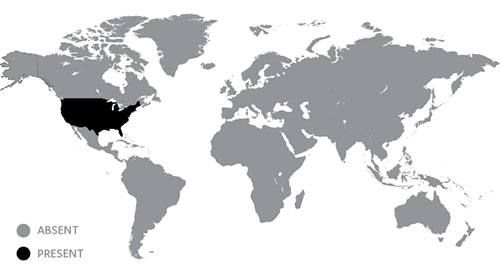 In many respects, the wing pattern of R. fausta resembles that of R. suavis, but R. fausta has both anterior and posterior apical bands and an isolated hyaline spot in the distal half of cell cua1. Rhagoletis suavis has a yellowish body; that of R. fausta is black and without yellowish bands at the posterior margins of the abdominal terga (Foote et al. 1993).