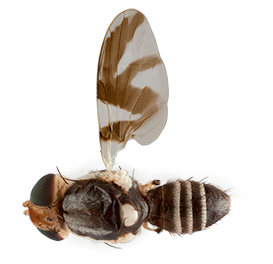 Rhagoletis pomonella, together with R. zephyria, R. mendax and R. cornivora are among the most readily recognised species of Rhagoletis by virture of their wing pattern, which consists of a slightly oblique discal band to which the anterior and posterior apical bands are connected, forming a characteristic F-shaped pattern in the apical half of the wing. The absence of the subapical band distinguishes the species of the pomonella group from all other species of Rhagoletis. Rhagoletis striatella, which also has an F-shaped apical wing pattern, is distinguished from R. pomonella by the colour pattern of the scutellum and the additional characters given in the key to species.

Rhagoletis pomonella is separable from the other three species of the pomonella group by the presence in most specimens of heavy black shading on the posterior surface of the fore femur, and, in specimens from the northern part of its range, by a generally larger body size and by the longer aculeus (0.90-1.49mm). In the southern part of its range, specimens of R. pomonella generally are smaller than in the north. For that reason and because of a consequently shorter aculeus, females are not separable from those of R. mendax and R. cornivora by the use of morphological characters. Mexican specimens of R. pomonella resemble those that occur in the United States and Canada but generally are larger and possess a light spot near the base of the apical wing band (Foote, Blanc and Norrbom 1993).

Not available/included in this edition.

HinfI and RsaI are fully diagnostic; DraI also has some diagnostic value.

Rhagoletis pomonella has been recorded on hosts from the Rosaceae family (for a full list of recorded hosts see CABI 2007).

Canada, United States and Mexico (Carroll et al. 2002). Distribution in the USA is widespread, but this species is absent from several states; the map as presented does not represent true geographic distributions within the USA.

It has been the subject of extensive taxonomic, ecological and pest management research in the USA and is considered the major economic pest species within the genus Rhagoletis. It is a major pest of cultivated apples. It is distributed over the central and north-eastern regions of mainland USA and extreme southern Canada. In 1979 it was introduced into the western coastline of the USA and is now widespread in that region (pers. comm. Drew 2010). 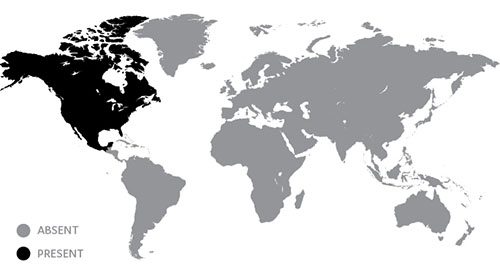 Rhagoletis pomonella is difficult to distinguish from several other non-pest cryptic species of the R. pomonella complex such as R. mendax, which is separated from R. pomonella based on the absence of dark markings on the fore femora and the shorter aculeus.