A wide range of fruit and vegetable are potentially vulnerable to fruit fly attack, although this depends on what species are in the region and the species host range. 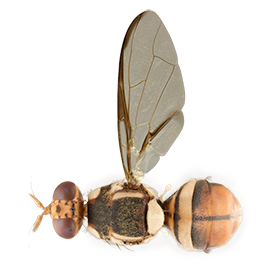 Bactrocera dorsalis is highly polyphagous, infecting a wide range of fruit and vegetables

Some species are highly polyphagous (e.g. Bactrocera dorsalis which infests over 300 species), other species are oligophagous infesting one family (e.g. B. musae is mainly a pest of bananas in family Musaceae), and other pests are monophagous infesting a single host (e.g. Zeugodacus decipiens only infests pumpkin).

Host lists for each species, or references with complete host lists, are provided in the Identify a species section of this site.

Fruit is increasingly likely to be attacked as it becomes more mature and as fruit fly populations increase during spring and summer, although some species are capable of ‘stinging’ hard green fruit. In urban home gardens, and in orchards close to urban areas, fruit fly populations are often much higher than in outlying orchards.

Fruit infested with eggs or larvae can carry the pest in trade or transport. The illegal movement of non-commercially produced fruit is the major risk pathway for exotic fruit fly incursions.

More information about preferred hosts is available on the individual species pages in the Identify a species section of this site.