The assays for real-time PCR detection of the species were based on the protocols developed at the Plant Health and Environment Laboratory (PHEL), Ministry for Primary Industries (MPI), New Zealand and published in 2016 for B. tryoni complex and D. pornia (Dhami et al. 2016) and in 2014 for D. suzukii (Dhami and Kumarasinghe 2014).

The real-time PCR assay for the detection of B. tryoni complex was further validated by David Waite and Dongmei Li while the assays for D. pornia and D. suzukii were validated by Dongmei Li.

The assays listed here are used at PHEL, MPI at New Zealand in routine diagnostics.

The assay on the B. tryoni complex were written by Dongmei Li, David Waite and Disna Gunawardana in 2016 for the Australian Handbook for the Identification of Fruit Flies (version 3.1) and updated for this website in 2017.

The assays on D. pornia and D. suzukii were prepared and written by Dongmei Li and Disna Gunawardana in 2017.

Real-time PCR TaqMan assay for the detection of B. tryoni complex

Genetically similar but morphologically different species have been reported in several fruit fly species (Clarke et al. 2005; Krosch et al. 2012). Such species are considered as belonging to ‘species complexes’ (Drew 2004). The commonly called Queensland fruit fly (Qfly) is one such species complex, consisting of four species: B. tryoni, B. aquilonis, B. neohumeralis and B. melas (Drew 1989). However, while B. melas exists in historic documents, researchers now consider it as a cryptic form of B. tryoni (Clarke et al. 2011).

Analysis of microsatellite markers has shown that there is only intraspecies level of differentiation present between B. tryoni and B. aquilonis (Wang et al. 2003). Those analyses also reflect that B. neohumeralis and B. tryoni represent separate species (Clarke et al. 2005; Wang et al. 2003). The closely related species B. curvipennis, however, is difficult to distinguish from B. tryoni complex based upon DNA sequencing of the cytochrome c oxidase subunit 1 (COI) gene (Armstrong and Ball 2005), although it is morphologically distinct. More comprehensive molecular analysis has similarly indicated that B. curvipennis has a paraphyletic relationship with the B. tryoni complex and is currently considered very close to, but not within, the B. tryoni complex sensu Drew 1989 (Blacket et al. 2012; Jiang et al. 2014).

DNA barcoding relies on PCR of predetermined marker genes, DNA sequencing and comparison of those sequences to a database of reference sequences (Armstrong and Ball 2005). Currently, DNA barcoding of the COI gene is the most commonly used technique for the molecular identification of fruit flies (Armstrong and Ball 2005; Blacket et al. 2012). This process is still relatively time consuming, with the quickest possible identification requiring a full day. In contrast, real-time PCR, or quantitative PCR (qPCR), drastically reduces the end-to-end time of analysis. This technique is based on the amplification of DNA monitored in real time and therefore without the need of post-PCR processing (e.g. gel electrophoresis), thus it enables identification within a few hours. The premise for this technology is that highly species-specific PCR primers or probes are designed to give positive reactions only with DNA of the target species. A positive identification is determined by the measurably lower number of PCR cycles taken for the amplicon to reach a given concentration, and for fluorescence to be detected (the quantification cycle, Cq), than would occur for a negative or suboptimal amplification, as would be expected from DNA of the wrong species. The TaqMan chemistry has the potential for greater specificity through the incorporation of a third oligonucleotide in the reaction. The method has previously been applied to other fruit fly species on the list in this manual (Burgher-MacLellan et al. 2009; Yu et al. 2004 & 2005).

Here, a real-time PCR assay for the B. tryoni complex has been developed, validated and applied by PHEL in the routine diagnostics of intercepted fruit fly material at borders, post borders and in recent New Zealand Qfly responses. 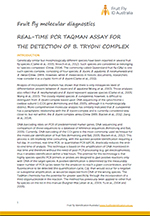 Tephritid fruit fly species, the Island fly, Dirioxa pornia has a wide range of hosts and attack ripe, damaged or rotting and fallen fruits. D. pornia belongs to a small group of flies that are morphologically as well as geographically distinct from each other. D. pornia is mainly distributed in Australasian-Oceanian (Carroll et al. 2006) whereas the sibling species, D. fuscipennis, is restricted to some Polynesian islands, such as Vanuatu (Hancock and Drew 2003).

D. pornia has been often encountered at New Zealand’s borders in citrus imports from Australia as eggs or larvae and can lead to delays in species identification if only using morphological features, thus the real-time PCR protocol targeting the COI gene for rapid identification was developed and validated, which provide rapid detection of those interceptions. The COI gene of D. pornia is distinct and easily separated from commonly intercepted fruit flies. The real-time PCR assay for D. pornia assay is species-specific, no cross-reaction observed with other fruit fly species tested, such as the related interceptions, B. tryoni complex, B. jarvisi (Dhami et al. 2016). The routine application of this assay at the New Zealand borders is already easing the quarantine decision making, leading to faster handling and more reliable decision making.

D. suzukii is an economically pest because females are able to lay eggs in healthy, unwounded fruits (Walsh et al. 2011), with a wide host range (Lee et al. 2011, Kacsoh and Schlenke 2012). Estimates of the economic burden associated with this pest due to crop loss and control efforts are dramatic in both Europe and North America (Bolda et al. 2010, Goodhue et al. 2011, Cini et al. 2012), therefore it is important to have effective tools to detect and managing this invasive pest.

Several countries where D. suzukii is not present, such as New Zealand and Australia, impose strict border controls to reduce the risk of invasion (Berry 2012, DAFF 2013). A large proportion of suspected drosophilids detected in imported produce or discovered in orchard surveys are in the larval stages, as their feeding leads to observable damage to the produce (Berry 2012). Unfortunately, like for most insects, it is impossible to identify the larvae, pupae and eggs accurately, unless they are reared to adults. Therefore it is necessary to develop a molecular-based assay to accurately identify the species in the early development stages.

DNA barcoding based on the cytochrome oxidase subunit I (COI) gene has been developed for D. suzukii and is currently used for its accurate identification (Hauser 2011). A number of COI sequences of D. suzukii are available in GenBank (Benson et al. 2005) and BOLD (Ratnasingham and Hebert 2007) databases. COI DNA sequences could therefore be used to develop a highly specific and sensitive real-time PCR assay to differentiate this species from other closely related species of this subgroup. We selected the DNA-binding SYBR dye-based chemistry which is simple (Maeda et al. 2003), and requires non-fluorescent oligos that reduce the cost. This real-time PCR approach is coupled with High Resolution Melt (HRM) analysis, which can be used to differentiate between the target and the non-target DNA (Reed et al. 2007). 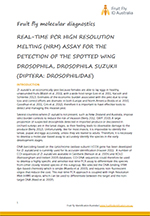